Horseshoe Hammond Casino opens late Summer ‘08
Horseshoe Casino celebrates the all-new 500 million dollar casino with a star-studded grand opening weekend. Bette Midler christened the new 3,500-seat entertainment facility, The Venue, for the grand opening performance. Josh Kelley kicked off his national tour and performed at the Skyline Stage while sharing a few personal anecdotes with the on looking intimate audience. The Venue was also proud to host the first local appearance in eight years by hometown heroes The Smashing Pumpkins.
Boasting more than 465,000 square feet, the new Horseshoe Casino features 158,000 square feet of gaming space, which is comparable to any floor in Las Vegas and equivalent to the size of six football fields. Horseshoe’s major expansion project completely transformed its coveted location along Northwest Indiana’s lakefront and capitalizes on its’ 20 minute proximity to Chicago.
The most amazing feature – it floats! The architect of record was Friedmutter Group, based out of Newport Beach, California who incorporated the elegant Las Vegas style onto the floating casino. The naval architecture for the world’s largest floating casino was designed and engineered by Lay, Pitman and Associates from Jacksonville, Florida. The Lay, Pitman group has become the premier floating casino designs with three nearby casinos on Lake Michigan and over twenty other designs nation wide. Based on a uniquely developed design concept utilizing modular construction, the facility consists of six barges, built at three shipyards and assembled on-site. Once the construction and outfitting was completed, the floating casino was moved into place and open within one week.
Rick Mazer, Indiana Regional President and GM, Harrah’s Entertainment, Inc., added, "It all came together so nicely and we are so excited this day has arrived. Everyone is having a great time."
Posted by Lay, Pitman, and Associates, Inc. at 11:32 AM 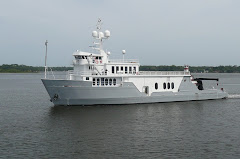 Lay, Pitman, and Associates, Inc.
Jacksonville, Florida, United States
Welcome to the Lay, Pitman & Associates’ blog. LP&A has designed many different vessels for major operators throughout the country. We specialize in all design aspects for the entire marine community. Specifically, LP&A are experts in the casino vessel industry. We currently have more than thirty LP&A designed casino vessels that have been built and several more are under design development, making LP&A a leader in casino vessel design experience. LP&A offers "full-service" vessel design including layouts, structure, outfitting, mechanical systems, HVAC systems, electrical systems, feasibility studies, stability analysis, specifications, concept designs, vessel inspections, and shipyard and regulatory liaison. We enjoy an excellent reputation not only with shipyards, owners and operators, but also with the U.S. Coast Guard, the American Bureau of Shipping, and Bureau Veritas.